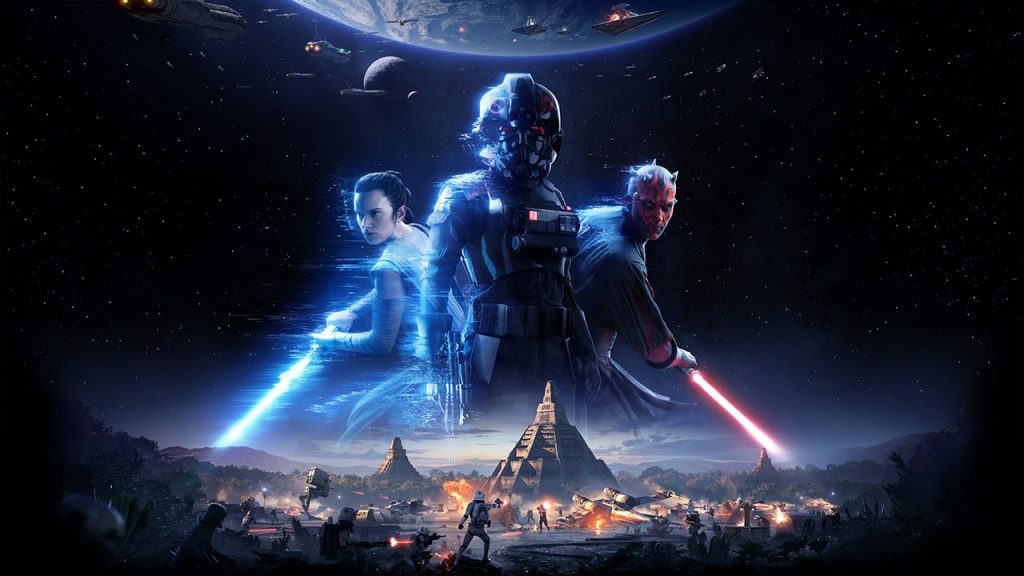 It must have been difficult for LucasArts to follow-up their all time best seller, but they managed to produce another great game. They’ve kept the core of the original game, which was the on-foot shooting action, but they’ve added three major improvements.

The most obvious change is that in Battlefront II gamers are able to play as special “Heroes”. Heroes are major characters from the six Star Wars films. Some of these playable characters include, Obi Wan Kenobi, Mace Windu, Luke Skywalker, Darth Vader, Darth Maul, Princess Leah, Jango Fett, and of course Yoda. The main advantage of the heroes is their substantially more lethal attack powers. The Jedi and the Sith characters are also able to run extremely fast and jump extremely high. Be careful when playing as Yoda. Since Yoda is a rather short creature, the camera angles aren’t very good and can be easily obstructed. My favorite characters are Mace Windu and Han Solo. Sometimes it’s hard to have good aim when playing as solo because I’m laughing at the jokes he cracks as he’s shooting at empirical soldiers. “Stay down, plastic boy!”

The second improvement in the sequel was the addition of space battles. While all the fighting was done on the ground in the original Battlefront, Battlefront 2 takes flight into space where arrays of ships are available for each battle. In every space battle, there is at least one fighter (for fighter to fighter combat), a bomber (for bomber to cruiser combat), and a transport ship (to carry a fleet from your cruiser to board an enemy cruiser) waiting for combat on the landing pad.

The final major enhancement in Battlefront II is the medals system. Players who accomplish unusual feats during a battle are awarded a medal and a temporary reward item or power. For example, if a player earns 24 points in one life, the player earns a guardian medal. As a reward the player’s defense is increased for a period of time. Points are earned by taking out opposing soldiers or capturing command posts. A record of the player’s medals, along with the player’s military rank, and other battle statistics, are kept track of. After the player has earned a medal so many times, the award item or power is made permanent. My favorite medal is the Frenzy medal, which is earned by taking down 12 opponents with the blaster rifle in one life. As a reward I receive an enhanced rifle that takes out most badies in 3 shots.

One the battle field, soldiers come equipped with a wide array of weapons including, bombs, blaster pistol, rifle, shock guns, recon droids, and much more. Each type soldier has its own combination of four weapons, which makes it critically important to choose the right soldier for the right job. Depending on military rank, players can control 1, 2, 3, or 4 other allied AI soldiers. Commands such as follow me or move out can be issued. Some levels where combat takes place in hallways can be frustrating sometimes. The AI opponents will usually through time bombs in the hallway, making it difficult to escape. I’ve found that the best counter-attack is to throw back my own time bombs.

Overall, Star Wars Battle Font II is a solid game. Optional features like auto-target make it easy for a person who’s never owned a shooter game to pick-up and play with ease. Its three modes of play, Rise of the Empire, Galactic Conquest, and Instant Action, make sure that players will get hundreds of hours of game play before completing the game. On par graphics, immersive game play, and dozens of playable characters make this a must have title.