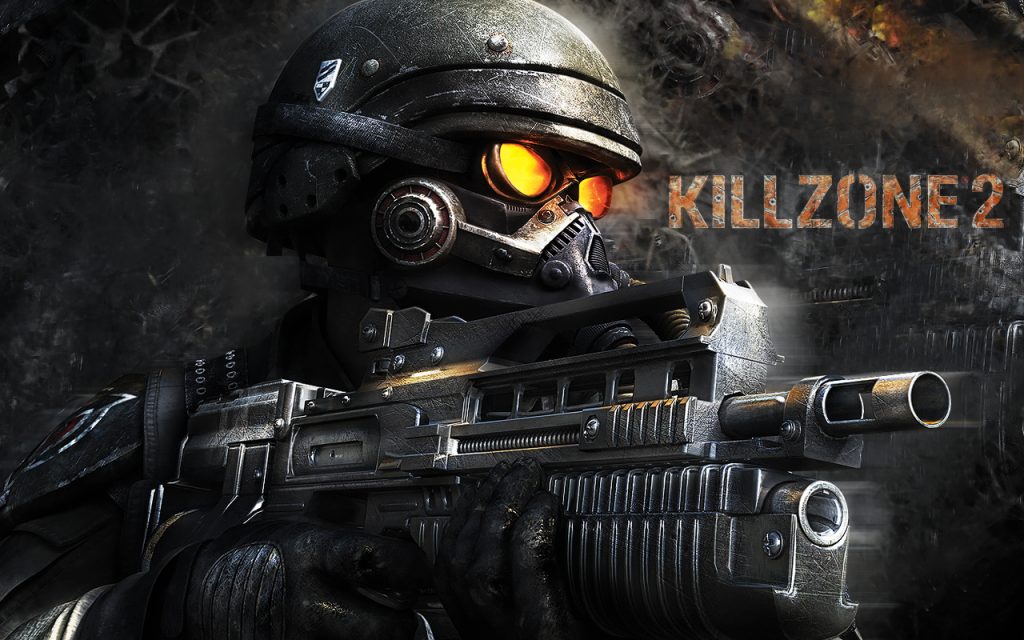 Killzone 2 is a sci-fi first person shooter by Guerrilla Games for the Playstation 3. Released early 2009 to much anticipation amongst the gaming world, Killzone 2 did not fail to go above and beyond expectations. One of the most graphically spectacular games of all time, Killzone’s unique art style stands out in the gaming world. The manner in which the games visuals are presented has been likened to a living, breathing oil painting, rounded out by very high quality textures, smooth anti-aliasing, outstanding dynamic lighting, and rich colors and environmental effects.

To say that Killzone 2 delivers is an understatement, the campaign is an average length, about 12 to 14 hours, and is full of intense firefights and suspenseful moments that will keep you on the edge of your seat from start to finish. As you take part in the ISA invasion of Helghan, you will use a large variety of weapons against your Nazi-esque foes, including everything from standard assault rifles and submachine guns to rocket launchers, flame throwers, bolt guns that can pin enemies to walls FEAR-style, and even a gun that fires lightning which disintegrates your enemies with glorious accompanying visual effects. Each weapon has its own unique animations and very detailed design, simply one example of the amount of time and effort Guerrilla spent on the minute details and tiny nuances of the game.

In one sequence near the end of the game, you commandeer a bipedal mech tank for a push towards the enemy stronghold. The entire sequence takes place in first person from inside the cockpit of the mech, and every detail is present, from the slight sheen of light and explosions on the glass, to the lights and buttons on the mech’s control panel. Guerrilla even included animations of your characters hands on the dual control yokes, corresponding to the movements you make on the controller, even down to the finger movements made when you pull triggers. Between the beautiful graphical style and the incredible attention to detail, Killzone 2 is one of the most immersive games I’ve ever played.

The elements that make Killzone 2 great don’t stop at the single player either, the game transitions smoothly into massive 32 player online battles with no drop in graphical quality and virtually no lag or other latency problems. The multiplayer is nothing groundbreaking, but that wasn’t Guerrilla’s aim: Killzone 2 takes a tried and true FPS multiplayer system such as can be found in Call of Duty or Halo and adds its own flavor, improving upon the system, and polishing it to a near perfect level. There are a variety of different game types available strongly resembling Call of Duty’s, but each with a slightly different spin on it. The one thing the game lacks is free for all mode, as all of the multiplayer variants are team-based, but this has yet to be a problem for me. The variants are engaging, and Guerrilla added one feature that most developers leave out in modern games: bots.

The ability to add bots to games cancels out the ability to rank up and earn new medals and ribbons, but it makes for some interesting scenarios and the ability to quickly and easily fill up a game to maximum capacity if you so choose. Bot AI is incredibly good, especially as they work together as a team, each fulfilling their individual roles, just as a trained squad would do in real life. A buddy of mine and I make a habit of setting up games consisting of the two of us versus 6 to 8 bots, and unless they are set on one of the lower difficulty levels, we usually lose. More than once I’ve found myself pinned by machine gun fire whilst a sniper climbs into a vantage point above my position, or seen a couple of assault-rifle carrying bots, using cover, alternately move from place to place, guarding each other against potential attacks.

Overall, I’ve found Killzone 2 to be engaging on every level: it has provided an enjoyable campaign experience in single player with heart pounding action and brutal boss fights which has proven to be quite replayable; it has delivered a cinematic experience comparable to very few other games on the market; and it has proven to be an excellent platform for competitive online multiplayer, 1v1 duels with friends, and excellent bot matches which can easily substitute for cooperative gameplay modes.